I first contacted the organiser of the Bengali naturist group in July last year, and a mere fifteen months later we met him in Sealdah train station in Kolkata ready to record for The Benefits of Nakedness, my BBC World Service series presented by Dr Keon West. This somewhat long gestation gained us one of the most important things in a radio interview (besides pointing the mic in vaguely the right direction), and also, I’m learning, one of the most important things when it comes to public nudity: trust.

It makes me wonder if perhaps there is more that connects radio production and public nakedness than first meets the eye (so to speak): you meet whoever you’re talking to on equal terms; you aim to get to the real person, judging them by what they say, not what their appearance says to you; you have to know where you’re going (and that it’s legal to be there); you don’t do it because it’s easy or lucrative, and finally you never ever have pockets in the right places (although a bum bag does come very close). I leave you to judge the success of the analogy.

Trust was very important to this group. They are secretive by habit and also by necessity. They live in a country that has a complicated relationship with the naked body, and from which regular international news stories emerge that underline its sexually repressive culture.

It isn’t illegal to be naked in public in India – in fact there are groups of holy men, a type of sadhu, who have renounced all worldly trappings, including clothing, who are naked in public all of the time. There are also female holy orders naked in their own communes. Nakedness has a certain place and even reverence. But on the other end of the scale, simply put, nakedness that isn’t sacred is sexual.

This group are set apart because they are naked for the sake of it. Not as a means of self-mortification, nor as a statement of sexual intent. They are married, for the most part, with varied professions and worldly concerns, and they just want to be naked, without hassle, without threat, without lust and without renunciation.

I had to prove to the group that I was real and that I was in earnest, and fifteen months later, the fruits of this protracted correspondence were born in the form of a day trip to an undisclosed beach south of Kolkata for some candid conversation and even more candid nakedness.

Here once again, I was the only woman. The wives, it seems, were in some cases simply not interested, in others actively disgusted and in one particular case too put off by her experience of public nudity in India to continue taking part. Certainly one in the group remarked that my presence aroused more curiosity from those we passed than they usually received as we walked away from civilisation, clearly with clandestine intent. [Although it could equally well have been the presence of a tall, athletic black man – Keon dubbed himself the ‘unicorn’ during this visit – but I doubt the mythical beast could have caused quite so much unbridled disbelief.] In any case, I did not feel threatened or unwelcome, but I also did not feel entirely comfortable. I can’t imagine what it would be like for other women in the group. I was there as a guest, and this comes with special privileges, especially in Indian culture, and also something of a barrier too.

It was a very humid day and there was some welcome relief in peeling off the layers of modesty and allowing the wind to cool the full surface of my skin. But, in undressing, I was even more conscious of being the only woman. I couldn’t ease myself into it by taking off my shirt nonchalantly as the men in the group were doing. The female body is considered naked, in my culture and all of the others we have been visiting, with much less skin on display than its male counterpart. I wished, rather impotently, that like Clark Kent I could just forgo the (un)dressing part and appear ready to begin.* There is something so undignified about hopping up and down topless, desperately trying to prise off sticky trousers.

Once again I used my work to shift any awkwardness – fixing all participants with my most serious and professional of gazes. Not here the easy-smile-and-nod-technique. Far safer the knitted-brow-and-fixed-eye-contact-approach. I recommend it for any awkward, naked, professional situations. It says at once “I defy you to even notice I’m naked – I haven’t” and “I’m that interested in what you’re saying I literally can only look at your eyeballs…”.** Yes, it’s a pretty eloquent look. 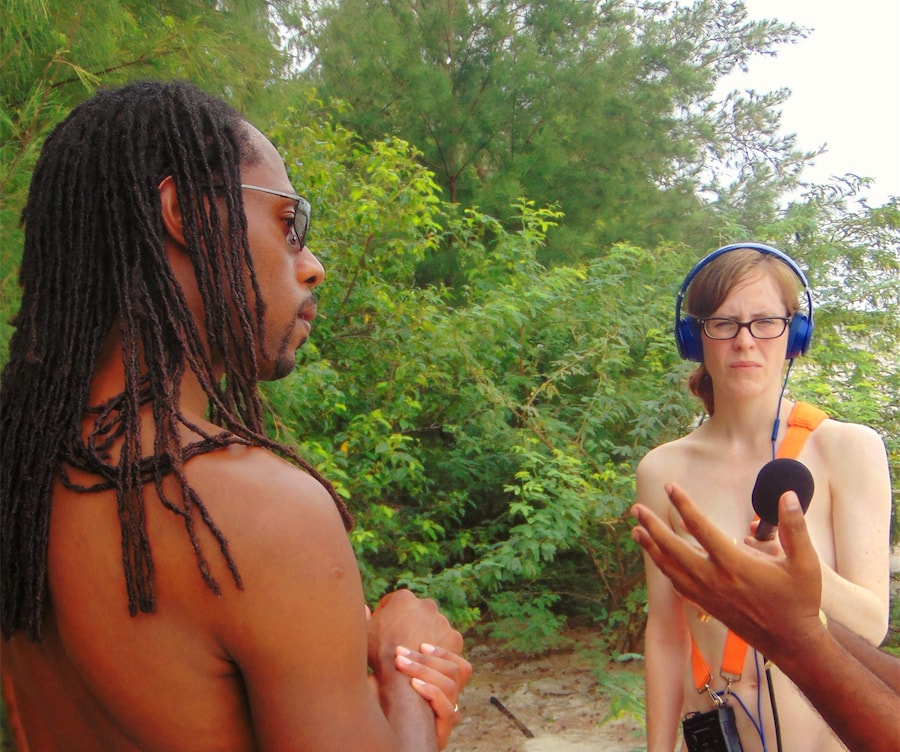 I suppose what was most remarkable was how similar this group were, despite obvious social and cultural differences, to many of the others we have met. They just really like being naked. So much so that they will travel an uncomfortable four hours each way to find a safe space to be so.

Or perhaps I should say safe-ish space. The length of the journey and the general secrecy of their plans did very little to allay my fears that this was actually rather dangerous – if anything they heightened them. There was also some threat of being moved on from our spot, but for more on that you’ll need to listen to the programmes. Indeed the group are always on the look out for new locations in case, or rather when, they are noticed by unaccommodating and uncomprehending local people.

Throughout the afternoon I threw furtive glances into the woods, expecting outraged Bengalis to emerge at any moment, irate and violently gesticulating. Fortunately there was time for all our questions and some photographs and, with very little incident, the gathering drew to a close. Never have clothes, so liberally coated in sand and sweat, looked so appealing to me. I struggled into them. Tired, and actually a little sunburnt, I set off with the group for a very late lunch, and then the four hour journey back to the hotel.

*When I say ‘like Clark Kent’, I don’t mean in all ways. Any suggestion of a naked Superman comic strip, animation or film is purely accidental and would be I imagine quite different in artistic intent from the original.

**Not that any other balls were in question. For clarity on this look, please see photo.

What’s the German for “totally starkers”?

The Benefits of Nakedness – Premiere!